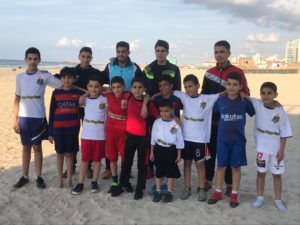 A team of children on the ground

Settlement in Gaza is thought to date back to the Bronze Age, when it was used by the ancient Egyptians as a center of trade. As far back into antiquity as 1500 BCE, an inscription on the Temple of Amun at Karnak in Egypt noted that Gaza was ‘flourishing’.

By the time Alexander the Great arrived, in 332 BCE, the land had already passed through the hands of the Philistines, the Israelites (under King David and King Solomon), the Assyrians and the Persians. In 63 BCE, Gaza became part of the Roman province of Judea (later named Syria Palaestina) and was governed by a diverse 500-man senate. In the late 4th century, the Bishop Porphyrius forced Gazans to convert to Christianity and burned down the pagan Temple of Marna to replace it with a church.

Islam arrived in 635 CE, turning churches into mosques, a process that was briefly reversed in 1100 by the Crusaders, who built a cathedral that now forms part of the Great Mosque. During the 14th century, Mamluk rule came to Gaza, but the population dwindled because of a deadly plague in the 1340s. In 1516 Ottoman Empire rule began, lasting until the British arrived in 1917.

During WWI, the British air force under General Edmund Allenby pounded Gaza while taking Palestine from the Turks, reducing much of the city to rubble. In 1927, a huge earthquake finished off much of what was left standing after the war.

Gaza was under British Mandate administration until 1948 when, with the creation of the State of Israel, Palestinian refugees flooded into the area, swelling its population from 35,000 to 170,000 in a matter of months. Egypt immediately responded to the declaration of Israel’s independence in 1948 by occupying Gaza. During the occupation, housing projects were expanded, but after President Nasser closed the Straits of Tiran in 1967, the Six Day War began and Israel took control of Gaza.

Israeli settlers arrived in the 1970s, and growing tensions ignited Palestinian activism and riots. The radical Islamic organization Hamas was formed in 1987, and the First Intifada began. A brief period of calm followed the Oslo Peace Accords, and in 1994 the Palestinian Authority (PA) assumed administrative control of parts of Gaza. But talks to transfer permanent control to the PA failed, and a Second Intifada began in September 2000, causing a series of Hamas suicide bombings and Israeli Air Force strikes.

Under international pressure and in a bid to improve Israel’s home security, Prime Minister Ariel Sharon ordered Israel’s disengagement from Gaza and removed all of the strip’s 21 Israeli settlements, with their 8000 inhabitants, in August 2005. Afterwards, a power struggle within Palestinian ranks began, culminating in the victory of Hamas in the January 2006 PA elections and the subsequent withdrawal of much international aid.

In June 2006, Israel Defence Forces soldier Gilad Shalit was kidnapped at the Gaza–Israel border. Several days afterwards, Israel launched ‘Operation Summer Rains’, a series of attacks that killed some 280 Palestinian militants and more than 100 Palestinian civilians. In 2007 violent clashes broke out within Palestinian ranks as Hamas took control from Fatah.

Meanwhile, from 2005 to 2008, thousands of Kassam and Grad rockets and mortars were fired on southern Israel from within Gaza, culminating in 87 rockets in just 24 hours on 24 December 2008. In response, Israeli forces launched ‘Operation Cast Lead’ by air and then by land. The Gaza War resulted in the deaths of more than 1400 Palestinians, with thousands made homeless. Israel lost 10 soldiers and three civilians. Many NGOs declared a humanitarian crisis, and Israel declared a ceasefire after three weeks of fighting.

In 2011, kidnapped soldier Shalit was handed over as part of a prisoner swap that saw 1027 Palestinians released from Israeli jails. The deal was a major coup for Hamas, increasingly unpopular in Gaza because of ongoing economic malaise.

The Islamist party got a further boost in June 2012 with the election of Muslim Brotherhood leader Mohamed Morsi in Egypt. As the flow of goods through tunnels that linked the strip with Sinai surged, Gaza experienced a rare period of economic growth.

But the boom, like Morsi’s government, was to be short-lived.

On 10 November 2012, a mortar fired from Gaza hit an Israeli military jeep, wounding four soldiers, and a retaliatory Israeli air strike killed four Palestinian teenagers while they played football. The killings provoked dozens of rockets which, in turn, led to Israel’s assassination of Hamas military commander Ahmed Jabari. By the time Egypt was able to negotiate a ceasefire on 21 November, more than 100 Gazans had been killed and almost 1000 wounded.

Rebuilding Gaza’s shattered infrastructure in the wake of the war was easier than in 2009 because of Hamas’ Egyptian allies, as well as significant financial aid from Qatar. But the coup that overthrew Morsi and installed the Egyptian military in Cairo in July 2013 was a hammer blow for Hamas, as the tunnels were gradually dismantled and the Rafah border once again slammed shut. As the year rumbled on, Hamas’ popularity in Gaza once again began to wane.

In early 2014, with both Hamas and Fatah in the West Bank facing rising anger for their failure to improve the lives of Palestinians in either territory, the two parties signed a unity deal ending their seven-year split. Although welcomed internationally, the deal was greeted with horror by Israeli Prime Minister Benjamin Netanyahu, who accused Mahmoud Abbas, president of the Palestinian Authority, of choosing Hamas over peace with Israel.

At the end of April, peace negotiations between Israel and the PA – doomed for some time – finally broke down. By the time war broke out between Israel and Hamas in June 2014, relations between Israelis and Palestinians were at their lowest since the Second Intifada (2001–05). Over the next 50 days, 73 Israelis and more than 2100 Palestinians would be killed and tens of thousands made homeless, while the limited infrastructure that Gaza had been able to develop was severely damaged by Israeli air strikes.

In 2017, Hamas elected hardliner Yahya Sinwar to replace Ismail Haniyeh, who had served as prime minister in Gaza since the takeover in 2007. Sinwar, who rejects negotiations with the Israelis (and even opposed his own release in the 2011 prisoner swap), was formerly head of Hamas’ military wing, Al Qassam Brigades, raising fears of a new conflict with Israel.

At the same time, Hamas – itself designated a terrorist association by the US and European nations – was increasingly being challenged by more radical groups in Gaza that drew inspiration from Isis, which has a prominent affiliate in Sinai to the south.

This entry was posted in Uncategorized. Bookmark the permalink.